Here I’m going show you how I put together a mad scientist Halloween party with a twist.  As opposed to a traditional Dr. Frankenstein or crazy scientist theme, I opted to make my scientist a grieving widower trying desperately to bring his dearly departed love back from the dead.

This was actually the second adult Halloween party I ever organized. Like the vampire nurse party from the year before, this one wasn’t a themed party per se in the sense that I didn’t prescribe what kind of costumes my guests should wear. It did however, include a similar bait-and-punchline technique and was very well received by all who attended.

To quote an old AMC television tagline, story matters. I knew that spending extra time setting this up would pay off in the end.

I created for myself the persona of a brilliant scientist, Dr. Will Hackmore, who had become a virtual recluse since the death of his beloved wife nearly a year ago. He had been tirelessly working to find a way to bring her back to life but had kept this a secret to avoid legal or moral controversy.

Finally, he believed he had found the solution. Eager to share his discovery and success with those whom he trusted, he decided to invite his closest friends and colleagues to a grand celebration. Since it was to fall close to Halloween, he chose to make it a costume party. 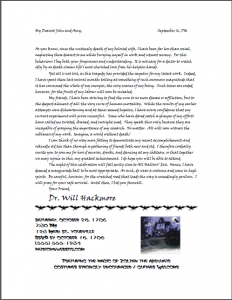 I wrote the invitation as a period piece and dated it accordingly. As with the vampire nurse party, my invitation set the mood and the premise, and got everyone utterly excited about the party. That was good to hear, because in my mind, there was the previous year’s party to live up to!

I printed my invitations on worn, parchment-style paper

. I also used a font that mimicked handwriting with an old fountain pen (Viner Hand ITC in MS Word). After the invitations had completely dried, I rolled each one up like a scroll and tied it with either an orange or black strip of leather purchased from a craft store. I don’t remember the name of the place, but Amazon has something similar

. I then hand-delivered invitations to each local guest. The rest I mailed via regular postal service and waited for the RSVPs to start piling in.

I have included an image of the invitation which you’re welcome to right-click and download for reference. It’s lacking the scroll paper since it’s only the digital, non-printed version, but it should give you the general sense of what I put together. 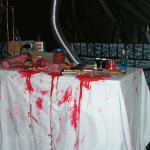 When guests arrived to my house for the party, they were greeted at the door by the obsessed doctor. I wore bloodied scrubs, evidence that I’d been frantically working on my bride until the very last minute. This alarmed the guests. Something just didn’t feel right.

Once everyone was settled, it was time for the big reveal. I disappeared to my basement laboratory and returned with her, holding her hand each step of the way.

Guests soon realized that my experiment hadn’t succeeded at all. Mys wife was alive and moving, but she wasn’t the woman they remembered. She was somewhat recognizable, but like the Bride of Frankenstein, her hair was streaked with white and she’d had some body parts sown on from “donated” corpses. Being undead, she also walked clumsily and behaved in a very feral manner.

When guests visited the basement laboratory, they saw a bloodied operating table (I made my own washable, non-staining blood), crude tools, chemicals in beakers, preserved organs, and severed body parts. This scientist had clearly gone mad.

The palm reader I hired the year before was popular, so I decided to hire another special guest for this party – a fire-eating magician by the name of Zoltan the Adequate, whom I highly recommend. He entertained us for about an hour or so with two sets of his perfect-for-Halloween blend of fire-eating, gore magic, and comedy.

As you’ll notice on the invitation, I also encouraged any fellow musicians to bring their instruments for an after-party jam.

Check out the Ideas section for more Halloween party inspiration, or get some party planning advice in the Hosting section.