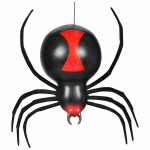 This is my review of the Gemmy Dropping Black Widow Spider. I bought this at Canadian Tire last year. According to the packaging, it was supposed to drop down to surprise unsuspecting visitors, but to my dismay, it didn’t work at all. It didn’t drop. The string just hung there, and the eyes didn’t even light up. Nothing.

I replaced the batteries with brand new ones, to no avail. Then I thought I probably just had a lemon, so I exchanged it for a new one – only to have the exact same problem. The only thing it was good for was a static prop. In short, I’m not a fan of the Gemmy Dropping Black Widow Spider

It was as though an entire shipment of these things was dropped and broken, but sadly I think the issue is more of a systemic quality-control (or poor manufacturing) problem that a one-bad-apple situation. I say this because unfortunately, this not the first Gemmy product that hasn’t worked as promised – the majority of the ones I purchased didn’t live up to their advertised promises.

I do NOT recommend this animatronic prop to anyone. Do not waste your money, nor your time.

My six-year old daughter was especially disappointed, because she was the one who had picked it out in the store and had been so excited about it. After seeing over two days that neither of the spiders worked, she asked me why. I told her that sadly some things aren’t built very well. Again, she asked me why. I could only shrug. Why indeed…

Check out the Reviews section for more product evaluations, or get some great  party planning advice in the Hosting section.